Storytelling for Kids How to Guide- Step 1

Ready to tell a silly story? It's super easy. All you need is a Who + What + Why Not to get a story started. 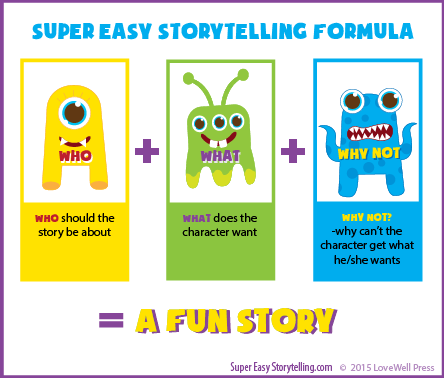 A Who is Who the story should be about. It can be anything- a person, a magical creature, an object, an animal. Look around the room for some inspiration. See a toy, a thing, a pet? You can create a story about any of them when you combine a Who with a What and a Why Not.

A Person: Grandpa, a boy, a girl, super stinkboy, a diabolical baby, a police officer, a scientist


To tell a spontaneous story with kids, ask the kids for ideas, or for more examples see our story prompts.

A What is what the main character (the Who) wants. Every plot starts with someone wanting something. What would your Who want? It could be to do something, to be something, or to overcome an obstacle. It can be ordinary, or outrageous-- and when it comes to kids, a story based on an outrageous goal is lots more fun. For example, a hippo who wants to be a ballerina or a snowman who wants to overcome his fear of snowflakes makes for a funny story.

Wants to become something: A dancer, a famous chef, a super hero, an ice cream billionaire, queen of the hill

Wants to do something: Win a race, bake a cake, take over the world, invent something, find buried treasure, be the first to travel to a new planet

Wants to overcome an obstacle: Conquer a fear of snowflakes, cross Lake Slime-a-lot, escape from a dragon's belly, be the first female Sumo wrestler


Ask your kids for inspiration, or for more examples see our story prompts.

A Why Not? is why the main character (the Who) of the storycan't have what he wants (the What). This is the start of your story plot-- character wants something but can't get it. The Why Not can be another character (a bad guy) an external obstacle (something is in his way) or an internal obstacle (a fear or inability). Don't worry if your story plot is unrealistic or doesn't even make much sense.You're telling a fun story with kids- it's supposed to be silly.

Examples of "Why Not":

Another character is trying to stop your Who: An evil ladybug, a dragon, a band of Lord of the Rings reenactors... anything from the Who list will do.

An external obstacle is in the way: A pit of slime, loses his magic wand, car won't start, a runaway train, gets trapped in a castle turret, minion revolution

An internal obstacle is in the way: Character doesn't know how, is clumsy, is scared, has an attack of the hiccups


Ask your kids for inspiration, or for more examples see our story prompts.

Now that you have a Who (main character) and What + Why Not (a plot) put them together to start telling your story.

Here are a few quick examples from the Who, What, and Why Nots shown above. Remember, the more outrageous the combinations, the more fun the story. For more examples, see our story prompts.

An alien + wants to be the first from his planet to travel to Earth, + but his minions sabotage his on-board navigation.

A finicky wizard wants to escape from a dragon's belly, but a pool of slime is in the way.

A child's homework just wants to relax in his child's backpack, but a puppy won't leave it alone.

A unicorn wants to win a skiing race but she's afraid of snowflakes.

Ready for more? Move on to Step 2 - Describe your character and Step 3- Add action.